How To Get Your Money Back From Africrypt

Africrypt was a cryptocurrency investment platform that was operating until earlier this year. Africrypt was founded and owned by brothers Ameer and Raees Cajee and consistently offered spectacular returns for its users.

The Africrypt review below seeks to determine whether or not a scam was perpetrated by the company and, if so, the nature and extent of the fraudulent activity.

Attempts to answer the question, ‘is Africrypt regulated?’ are difficult, due to the unclear nature of the regulatory situation in South Africa regarding crypto-investment. The current environment is so hazy that there is no definite and regulated licensing provision at all when it comes to crypto trade, brokers, and platforms, which makes weighing up whether a company is a scam or a legit concern extremely challenging.

In terms of the licensing and regulation that a potential investor would want to see in a trading platform, Africrypt would have fallen far short.

Is Africrypt a Scam or Legit?

This crypto investment platform turned out to be a large scale Ponzi scheme; the Africrypt scam made headlines when the founding brothers of the company disappeared, taking $3.6 billion of investor’s money with them in June of this year. But concerns were already being raised about Africrypt’s legitimacy and security following the investment platform’s being hacked two months prior, an incident in which billions of dollars were removed from investors’ online wallets. In light of the brothers’ disappearance, there has been growing speculation that this hack was an inside job.

In addition to this, during its time of operation, allegations have been made that representatives from the company made continuous calls to traders to try to persuade them to invest higher sums, and that warnings about the level of risk inherent in trading using the platform were either not published on the website, or deliberately hidden.

Allegations of Africrypt’s existence as being part of a money laundering operation have also been made, and various authorities are investigating the case.  In terms of the question, "is Africypt a scam?" - the answer is yes, and one of the biggest in the history of crypto.

There have been a plethora of complaints from defrauded investors following the Africrypt scam. One of the most common Africrypt complaints was the inability of traders to withdraw their funds, and the publication of false or misleading information on the company’s website.

Due to the uncertainty around regulation in the crypto sector, the South African authorities have been unable or unwilling to act in terms of bringing a case against the scam platform or the brothers themselves, who remain at large. Due to this, at present, no Africrypt lawsuit has been successfully brought.

There is a multitude of complaints and stories from investors who have lost their money to Africrypt, detailing the impact that this has had on their lives: 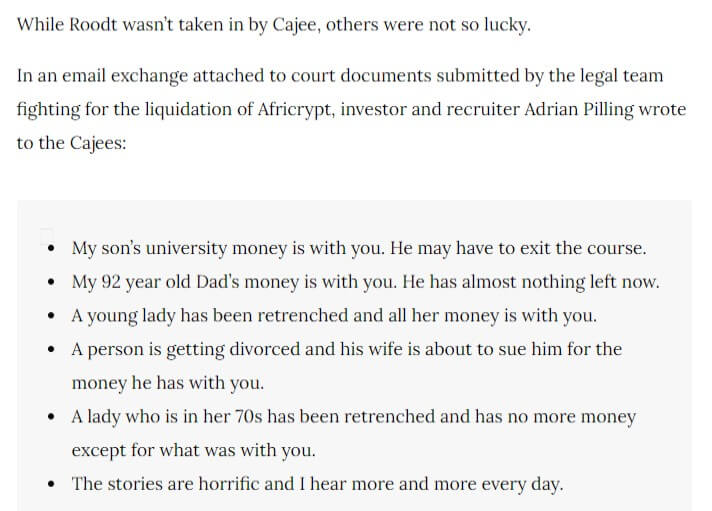 Can I Get My Money Back From Africrypt?

It’s a possibility, but it may be difficult. If you were a victim of the Africrypt scam, then you could attempt to recoup funds yourself by approaching all of the bodies and individuals (that can be tracked down) and making your case, or applying to the regulator to do so.

However, for the greatest chance of successfully obtaining an Africrypt refund, then the best option is to instruct a professional chargeback company to fight on your behalf. An experienced chargeback company will have the industry knowledge, skills, and expertise to pursue your case against this scam platform and the likelihood of getting your Africrypt money back will be exponentially higher.

How Does The Chargeback Process Work?

The first step is to choose a chargeback company to work with. Check review websites for testimonies from past clients, and also find out the company’s success rate when it comes to winning back funds for their clients. Once you’ve made a selection, get in contact with the company: in most cases, there is a simple online form to submit in the first instance.

A member of the chargeback team will then discuss the details of your case in-depth with you. If it is deemed to have a high chance of success, then it will be taken on by the chargeback company. The next stage is evidence gathering. The team will collect all the documentation necessary, and at this point, you will probably be asked for evidence of the investment of the scammed funds, and the dates on which these transactions took place.

The chargeback company will then attempt to track down and confront all parties involved in the scam to arbitrate and fight on your behalf, to secure a partial if not the whole refund of the investment made with the fraudulent platform. Once this is won, the funds will be deposited into your account.

If you have lost funds to the Africrypt scam, then the best course of action is to get in contact with a chargeback company at your earliest convenience, to start the ball rolling and begin the process of attempting to recoup your investment.